Despite showing poor performance in the last few years, there’s every reason to believe that MoneyGram’s (MGI) worst days are behind it, as the growth of the company’s digital business helped to offset some of the losses of the walk-in channels in recent quarters. In addition, the ongoing expansion of MoneyGram’s business around the world along with the possibility of being acquired by a larger competitor are making the company’s stock an attractive investment. Considering that MoneyGram’s stock trades at a forward P/E of 19.66x, while the industry’s median forward P/E is 26.74x, the risk of owning the company’s shares is minimal and that’s why I decided to acquire MoneyGram’s shares in recent days.

Lots of Room for Growth

MoneyGram is a global omnichannel money transfer business that specializes in cross-border transactions. It offers customers the ability to transfer funds through its walk-in stores, mobile app, and directly through its website. Since the company has physical locations all around the globe, the majority of them were forced to close in the first half of the year due to a pandemic, and only recently they started to reopen. As a result, the company has experienced a boost in digital transactions in recent months and at the end of June, the digital business accounted for 27% of the overall revenues, an increase from 18% at the end of Q1.

To strengthen its position in the money transfer business, MoneyGram announced a strategic partnership with the US tech company Ripple in 2018 and currently it processes its cross-border transactions through Ripple’s remittance network. In exchange for providing the liquidity to Ripple’s network, the latter pays MoneyGram development fees. In Q2, Ripple paid $15 million to MoneyGram in development fees and the partnership so far has been advantageous to both parties.

Despite that payment, MoneyGram’s revenues in Q2 were still down 13.6% Y/Y to $279.8 million due to the pandemic, even though the company beat the Street estimates by $24.48 million. In addition, MoneyGram generated $24.7 million in FCF, which is an increase of 24% Y/Y, and its EBITDA margin during the period was 20.2%. MoneyGram also managed to make $22 million in operating income, up 54% Y/Y. At the same time, the company’s digital business was able to offset a large chunk of losses of the walk-in business and in Q1 and Q2 the number of digital transactions increased by 57% Y/Y and 106% Y/Y, respectively.

In addition to all of this, MoneyGram’s forward P/E of 19.66x is below the industry’s median forward P/E of 26.74x, which suggests that its stock is undervalued in comparison to its rivals. While the company has negative TTM EV/Revenue and EV/EBITDA ratios, it’s safe to say that they’ll improve in the following months, as its business has slowly started to recover.

Source: Yahoo Finance. The table was created by the author

The biggest downside of MoneyGram is that it’s unlikely that its business will fully recover until the pandemic is over. While its walk-in channels are operational again, the lack of immigrant workers, who represent a large chunk of its customer base, will weaken the demand for cross-border transactions, as lots of international borders are still closed. This will have a negative short to near-term effect on MoneyGram’s business. In addition, the rise of digital competition along with the strengthening of Western Union (NYSE:WU) is likely going to lead to lower margins in the following years. Despite all of this, MoneyGram has made several moves in order to minimize its downside.

Since the beginning of summer, MoneyGram has started to expand across the globe in an effort to strengthen its foothold in the cross-border payment market. It signed numerous partnership agreements with major banks and fintechs from the Middle East, Africa, and South Asia, which will help it to acquire additional customers around the world. In addition, there’s every reason to believe that MoneyGram could be acquired by one of its larger competitors.

In May, a popular European fintech company Revolut said that it’s looking for a suitable acquisition, while in August Western Union said that it will also become active on the M&A front and there was even news that the company is currently in talks to acquire MoneyGram. In the past, MoneyGram already had offers from companies like Euronet (NASDAQ:EEFT) and Ant Financials. Considering its recent expansion, MoneyGram will become a valuable asset in the hands of one of its bigger competitors and the possible acquisition will also be able to unlock value for the company’s existing shareholders. As the industry slowly starts to consolidate, MoneyGram could become the next takeover target. 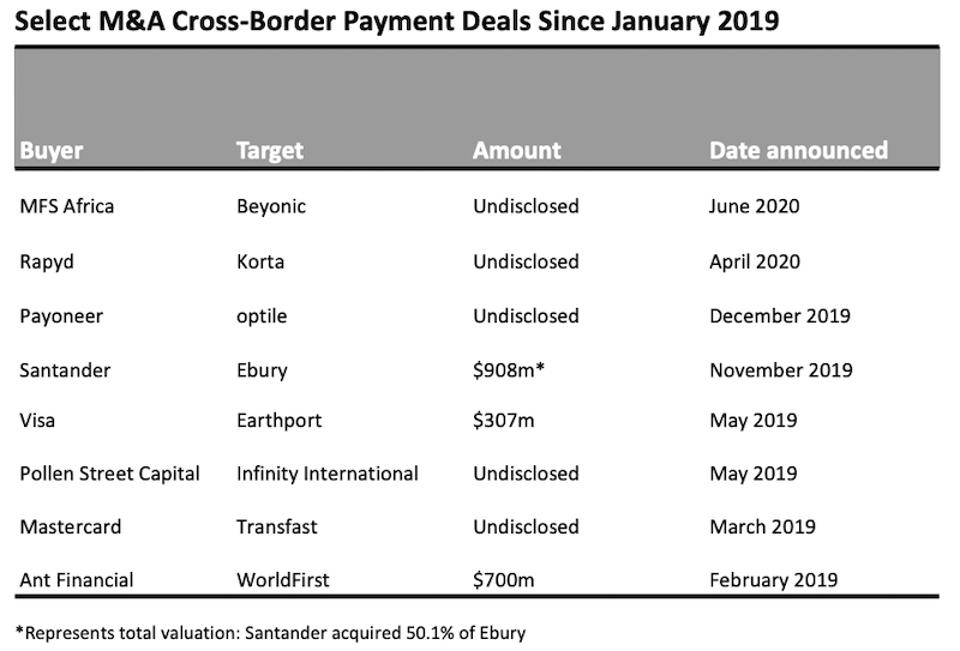 Overall, MoneyGram’s stock has a lot of upside at the current price, as there’s a high chance that more shareholder value will be created in the following months either through the growth of the company’s digital channels or thorough a possible acquisition. As economies start to reopen and recover, there’s every reason to believe that the global remittance market will follow the trend and cross-border payments will return to its 2019 levels in the next couple of years.

MoneyGram already started to experience a Y/Y growth of cross-border payments in June after a steady decline in the first half of the year and more money will likely be transferred in the second half of the year. Since MoneyGram’s revenues and earnings are expected to increase next year on a Y/Y basis, the downside of owning the company’s shares is limited.

Disclosure: I am/we are long MGI. I wrote this article myself, and it expresses my own opinions. I am not receiving compensation for it (other than from Seeking Alpha). I have no business relationship with any company whose stock is mentioned in this article.